On The Night is a live album by Dire Straits.

It was recorded at Nîmes in France and Rotterdam in Holland in May 1992 while the group were promoting their final studio album On Every Street.It was released in May 1993.

Their first live album, Alchemy built on the success of the first four very goo studio albums. Then came the over-rated but immensely popular Brothers In Arms in 1985 and then a long wait before On Every Street was released in September 1991.

By then Dire Straits had lost their “coolness” if that’s the right word for what made them special. The On The Night live album has slipped into almost obscurity… an afterthought.

Dire Straits On The Night 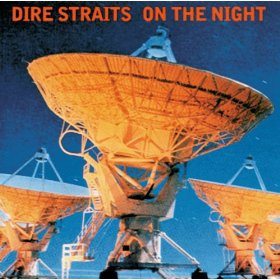 Four songs from On Every Street and four more from Brothers In Arms means that there are only two of their old classics that were also on Alchemy featured. It’s a shame that more songs weren’t added when the album was remastered to make it more representative of their concerts.

This is a highly professional band and I particularly like the addition of saxophone and flute to the songs but then I do have a bias this way.

Buying On Every Night

Do you think this album is the best live album by Dire Straits or Mark Knopfler?

This album is NOT included in the poll to find the best classic rock live albums but Alchemy is. Do you think On The Knight should be there as well?