BBC Radio One Live In Concert collects together songs from two live recordings by The Bothy Band from 1976 and 1978 that were recorded by the BBC in The UK. 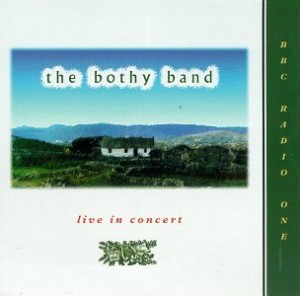 Songs On The Bothy Band BBC Radio One Live In Concert

1. Martin Wynne’s/The Longford Tinker
2. Two Jigs/The Kid In The Mountain
3. Pasty Geary’s/Coleman Cross
4. Sixteen Come Next Sunday
5. Michael Gorman’s/Road To Lisdoonvarna/Joe Cooley’s
6. Lucy Campbell/The Laurel Tree
7. Fionnghuala
8. Farewell to Erin
9. The Kesh Jig/Give Us A Drink Of Water/The Flower Of The Flock/Famous Ballymote
10. The Tar Road To Sligo/Paddy Clancy’s
11. The Maids Of Mitchelstown
12. I Wish My Love Was A Red Red Rose
13. Pipe Solo: Garret Barry’s/The Bucks Of Oranmore
14. The Morning Star/The Fisherman’s Lilt/The Drunken Landlady
15. Do You Love An Apple?
16. A Jig and Five Reels: Roger Sherlock’s/Around The World/Rip The Calico/Martin Wynne’s…

These songs came from the following concerts:

Buying The Bothy Band BBC Radio One Live In Concert

Is it the best live album by The Bothy Band? Which do you recommend?