Dick’s Picks Volume 4 is a live album by the Grateful Dead.

It was recorded at the Fillmore East in New York City on February 13 and February 14, 1970 and features the third sets from both concerts. It was released in February 1996.

Dick’s Picks are archival live recordings selected by the Grateful Dead tape vault archivist Dick Latvala and were named after him. 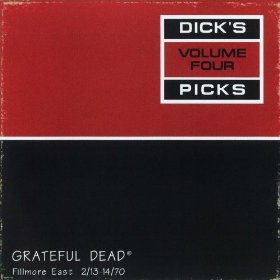 I’ve said it before and I will again but, as an outsider, I find the sheer volume of live recordings from the Dead scary.

Logic tells me that there may be better jewels away from the mainstream of Live / Dead and Europe 72 but finding it is a problem.

That’s why I’m very grateful to the Deadheads who have already voted in my poll to find the best live albums by the Grateful Dead. At the time of writing, this album is the highest ranked of the Dick’s Picks album.

If you love the Grateful Dead, I’d appreciate your votes as well but if you’re just investigating the band, you can get the results without having to vote.

I realise that the Dead can get strangely addictive but I think most of us want to limit our purchases and just pick the best two, three or four albums.

Well that’s what I thought before I started to become addicted and I’m taking things very carefully after a splurge based on the results of the poll.