Live At The Cow Palace: New Years Eve 1976 is a live album by the Grateful Dead recorded in Daly City, near to San Francisco in California.

This concert recording catch the Dead between the Blues for Allah and Terrapin Station studio albums and follows their break in performing live in concert regularly between 1974 and 1976. 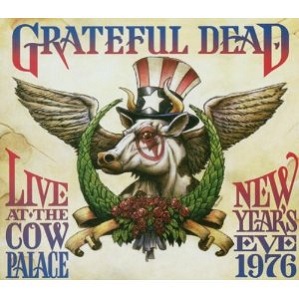 This is probably not the best place to start your collection of Grateful Dead live albums. I suggest Europe 72 volume 1 and volume 2 which is the route I’ve taken to appreciating their music and approach to live concerts. The original Europe 72 album is currently topping my poll to find the best live album by the Dead and it’s followed by Live/Dead from 1969.

Alternatively, the first two Dead albums that I really fell for were Ladies And Gentlemen The Grateful Dead from 1971 and To Terrapin Hartford May 1977

In October 2014, it’s not available as a digital download on iTunes.