Songlines Live is a live concert DVD by the Derek Trucks Band.

It’s unusual for me to feature a DVD which doesn’t have an accompanying CD or digital download to create an audio only version but I tend to make exceptions for Trucks.

The band recorded a studio album called Songlines but this is much more than that album played live. 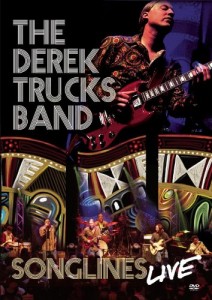 It starts with some short interviews with the members of the band where they explain their approach to music and then it quickly gets into the concert.

Playing on the DVD are:

Is this the best live recording by the Derek Trucks Band or Tedeschi Trucks?

I haven’t included it in the blues album poll because it’s only on DVD.