The Woodstock Experience is a double album by Johnny Winter featuring the recording of his performance at the 1969 Woodstock festival and his debut self titled studio album.

This is one of a series of albums that have been released to celebrate the 40th anniversary of Woodstock. Others include:

Other recordings of performances at Woodstock have been released by Jimi Hendrix and Joe Cocker. 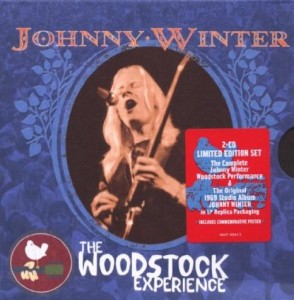 CD 1 Studio album called Johnny Winter
1. I’m Yours And I’m Hers
2. Be Careful With A Fool
3. Dallas
4. Mean Mistreater
5. Leland Mississippi Blues
6. Good Morning Little School Girl
7. When You Got A Good Friend
8. I’ll Drown In My Tears
9. Back Door Friend

Is this the best live album by Johnny Winter?