Viva is the first live album by glam / art rock group Roxy Music. It has been pulled together from three concerts at the Glasgow Apollo in November 1973, Newcastle City Hall in November 1974 and the Wembley Arena in London in October 1975.

This is Roxy Music after Brian Eno left. All three concerts feature his replacement Eddie Jobson.

I’m very conflicted about this live album and I’ve been putting off writing a review in the hope that we might get a remastered, extended version that takes away all my criticisms.

But I’ve been waiting for years to get a better version of Viva and I don’t even hear any rumours. 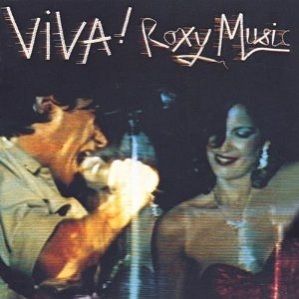 My main complaint is that we only have 46 minutes of music here pulled from three different tours across three different years when Roxy Music were challenging David Bowie for the title of the most innovative rock stars.

This is what we get:

There are so many more traffic from the first four albums in particular plus of course Virginia Plain that I want to hear this version of Roxy Music perform live. This is especially the case if we are never to hear any Brian Eno / Roxy Music live recordings.

The Newcastle City Hall from October 28, 1974 set list (available to hear at Wolfgang Vault) for example also included Prairie Rose, Beauty Queen, Mother Of Pearl, Song For Europe, Three And Nine, If It Takes All Night, All I Want Is You, Street Life, Virginia Plain, Editions Of You and Remake Remodel.

We have two slightly different versions of Roxy on this album:

The hard core are:

John Wetton plays bass on the tracks recorded in Newcastle in 1973 and ’74 but it’s John Gustafson play playing bass on Both Ends Burning which is the only track from Wembley.

Roxy Music were such a talented group and they had such a distinctive sound. In the mid 1070s I thought this was music of the future. It seems something has gone seriously wrong.

It’s powerful, energetic and dynamic. I certainly believe the group add to the studio performances when they are performing live.

There seem to have been four different versions of Roxy Music:

This mark 2 is potentially the very best as it can build on mark 1. Viva is all we’ve got to show us how good they were.

And to be blunt it’s not up to the full task. It shows promise but this is a classic case of sending an under-developed boy to do a man’s job when there are so many classic live albums from the 1970s.

I don’t like the fact that it’s three concerts with different band members compressed into one live album but I’ve read that much of this recording comes from the 1974 concert so it might have more purity than I first imagine.

This could have been and should be much better. A remastered and extended version has the potential to be one of the best live albums ever recorded and released.

Viva vs The Studio Albums vs Roxy Music Compilation Albums

This may be controversial but I don’t believe that Roxy Music recorded a really great studio album. I’ve bought them all but there isn’t one that is an automatic pick when I want a dose of Roxy.

Individual songs – especially on the first four albums – are superb but the albums don’t hang together for me. Perhaps it’s because they are over-produced or perhaps it’s the order of the tracks.

The compilations suffer because the popularity of the late 1970s and early 1980s Roxy Music songs means they have to be included and in some cases dominate.

There was a great Roxy Music compilation album on a single vinyl LP released in 1977 which was an almost perfect summary of early Roxy Music called Greatest Hits.

It included the following:

Virginia Plain, Do the Strand, All I Want Is You, Out of the Blue, Pyjamarama, Editions of You, Love Is the Drug, Mother of Pearl, A Song for Europe, The Thrill of It All, Street Life

It would make a great companion album to Viva as it fills in many of the holes but still leaves you without some important Roxy songs like Remake Remodel.

If you want some Roxy Music but want to limit it to a couple of albums, I’d select Viva and Roxy Music Live from 2001.

Is it the best live album by Roxy Music?