Creedence Clearwater Revival Live In Europe is the first live album released by CCR in 1973. It was recorded on tour in Europe in September 1971.

It is alleged that this isn’t a live album at all but a rehearsal tape with the sounds of an audience dubbed on later. I can well believe it.

This is also Creedence Clearwater Revival performing as a trio as rhythm guitarist Tom Fogerty was no longer with the group and this change also affected their sound. 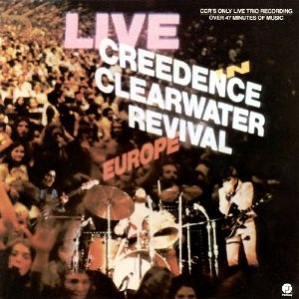 It surprises me how varied this set list is and how much it pulls from the earlier albums Bayou Country and Green River. Still Creedence have written so many great songs, I can’t complain too much about the set list.

I bought Live In Europe many years ago when I was going through a big Creedence Clearwater Revival phase. It was a huge disappointment. I played it twice but I thought it was an embarrassment.

This is exactly the kind of recording that can give live albums such a  bad reputation as it adds nothing except a chance to bleed fans dry of a bit more hard earned cash.

I was astonished to read that there are some positive reviews on this album at Amazon. I remember reading another blog and the author said that he couldn’t stop playing Live In Europe.Perhaps remastering has helped liven it up.

Taste is a funny business.

If you love CCR and want everything they’ve produced, then you can get this live album from:

Love it or hate it?

Do you think I’m wrong to dismiss it?

Please help me find the best live albums by voting in the readers polls. It is NOT nominated in the poll to find the greatest Southern rock live albums. but their earlier live album, The Concert is.