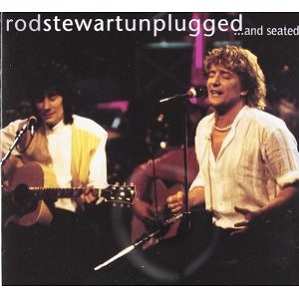 This alum appears to be available in two versions as a CD or mp3 download with either 15 or 17 songs. If you decide to buy, you need to take care on which you order.

The bonus tracks that are available on some versions are:

This is an excellent collection of songs which goes back to his great early albums with four coming from Every Picture Tells A Story.

I think this is a delightful performance and restored a lot of Rod’s credibility which had been lost in the wilderness for many years.

Here is Handbags And Gladrags, a tune from very early in Rod’s career and revived by the Stereophonics.

And Reason To Believe

Unplugged And Seated vs A Rod Stewart Compilation vs Individual Albums

It’s easy to be put off Rod Stewart by what he became in the late 1970s with songs like Do Ya Think I’m Sexy and Baby Jane.

A good rock and pop album collection needs at least one Rod Stewart album but which one?

As I mentioned earlier, he is a terrific interpreter and populariser of other people’s songs.

In the early 1970s he recorded some excellent solo albums while he was also performing with The Faces. In particular Gasoline Alley and Every Picture Tells A Story are both critics’ favourites.

There are various compilation albums that mine this early period before Sailing and the Atlantic Crossing album. Other albums look at this later period and a few are complete career summaries.

These work well but I don’t think they have the charm of Unplugged And Seated.

I also believe you need something with The Faces. I like the Coast To Coast live album a lot and it certainly contrasts by providing an electric version of Rod Stewart to go with the acoustic unplugged album. The problem is that it doesn’t have many early songs by The Faces. They are a group who desperately need an archive release with plenty of live recordings.

Love it or hate it? Leave a comment and explain your thinking to the world.

Is this the best live album by Rod Stewart?