Live In Liverpool is a live album recorded by a reformed Echo & The Bunnymen in 2001.

Before I saw this is a music store, I’d forgotten how much I loved Echo & The Bunnymen in the early to mid 80s.

I play this and it takes me right back in time. The band are older but they put on a fine show on this CD.

Echo & The Bunnymen Live In Liverpool 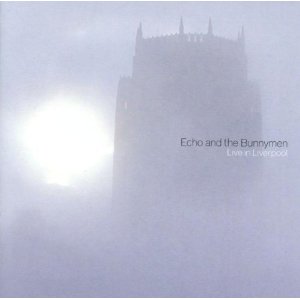 I love the moodiness of that album cover too.

It was Ocean Rain that really grabbed me and the hit single Bring On The Dancing Horses which I miss from this set list.

3 tracks from Crocodiles, 2 from Heaven Up Here, 2 from Porcupine, 4 from Ocean Rain, 1 from Echo & The Bunnymen, 1 from Evergreen and 4 from Flowers pays respect to the early songs that made the band’s reputation and features some of their newer songs.

It works very well and I don’t feel as if I’m jumping backwards and forwards across twenty years.

Echo & The Bunnymen consisted of the following musicians at this time

The important thing is that the two who define the unique Bunnymen sound – McCulloch and Sergeant – are still in prime form.

I’ve lost my familiarity with these songs but I’m not picking up much of an impression that the songs have been changed much to play live. In fact I have to admit that I’ve never heard the recent songs.

Here is a video reminder of how good Echo & The Bunnymen are, playing Killing Moon on The Tube TV programme when it was first released as a single – aaaghh bless, don’t they look young.

If you’ve been touched by the Bunnymen in the past, I think you’re going to love this album and the intensity of a live setting.

The Bunnymen were playing in their home City and are received to a big roar from the crowd at the start. There’s cheering between songs too but the banter has been edited out.

Of course this isn’t the original band and it’s recorded 15 years after their peak. However don’t get the impression that this is a nostalgia act going through the motions.

If you were a fan in the early eighties, you need to hear this album.

If you like The Doors and Velvet Underground, you should try Echo & The Bunnymen.

I like it a lot. It’s another of those albums that when I start playing it, I find it very difficult to stop.

What Others Say About Live In Liverpool

It hasn’t high on the critics lists of the best albums.

These are affiliate links and if you buy, I will earn a small commission.

What Do You Think About Echo & The Bunnymen Live In Liverpool?

Let me know what you think by leaving a comment below.

Should there be an Echo & The Bunnymen revival?