Rank is the first live album by British indie rock group The Smiths. It was recorded at the National Ballroom in Kilburn, London in October 1986. It selects 14 of 21 tracks played at the concert which was broadcast on BBC Radio 1.

The band were promoting their studio album The Queen Is Dead at the time, which is often hailed as the essential album by The Smiths. This makes it a good time to issue a live album.

Unfortunately this is still the only live in concert album by The Smiths. 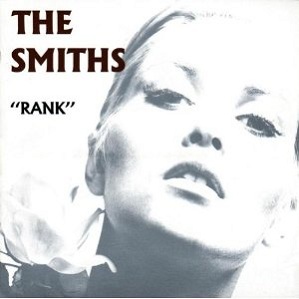 Six songs from The Queen Is Dead and various singles and rare recordings from the early compilations.

The missing songs include

I think it’s a real shame that these other songs haven’t been added as a bonus at some stage since Rank was first issued in 1988. It would have made this even more essential.

In 2011 The Smiths issued a big box set of all their albums including Rank called Complete. Sadly these missing tracks weren’t even included so it doesn’t look good for the future.

When bass player Andy Rourke was fired in early 1986, Craig Gannon was hired to replace him. Within two weeks Rourke was back and Gannon moved to rhythm guitar.

Here are videos of The Smiths performing live in concert.

How Soon Is Now – this is the song omitted from Rank

There’s A Light That Never Goes Out – also missing from Rank. For some strange reason, this announces the song as Panic.

What Other People Say About Rank

Buying Rank By The Smiths

What Do You Think About Rank?

Do you think this live album by The Smiths does them justice? I’m hoping that Rank is extended and that we several more live albums from the band from the 1980s.