I Might Be Wrong is a live album by British rock band Radiohead. It was recorded in at various concerts between May and August 2001 on the tour to promote the Amnesiac album. 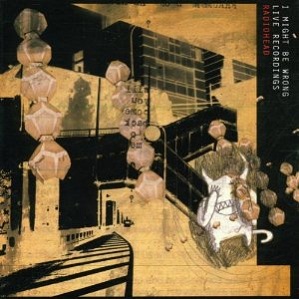 Radiohead make me feel old. From OK Computer onwards, I’m struggling to understand why the band are so highly regarded.

Where are the tunes and melodies? Energy and excitement? And why does the lead singer have to drone on so much?

I would expect fans of Radiohead to be disappointed at how short this live album is and that they’d want songs from OK Computer and The Bends to be featured for a  more comprehensive live experience .

Videos of Radiohead performing live in 2001.

What Other People Say About Radiohead I Might Be Wrong.

Despite my reservations, I Might Be Wrong has appeared regularly in the lists of best live albums.

Nearly all the reviewers at Amazon like the album very much. It looks like I’m in the minority.

What Do You Think About I Might Be Wrong?

Do you think this is a great live album or do you agree with me and you’re mystified at the attraction that Radiohead seem to have?