At The Apollo is a live album and DVD by the Arctic Monkeys.

It was recorded at the Manchester Apollo on 17 December 2007 and released in November 2008. 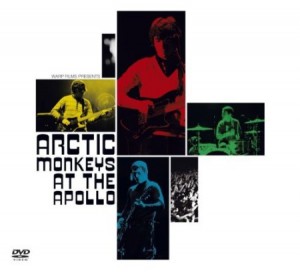 Songs On Arctic Monkeys At The Apollo

There are a number of different versions which makes it more difficult to be sure that you’re going to buy the one that you want. The one to look for has a CD and a DVD with bonus songs from a concert in Texas.

DVD
1. Brianstorm
2. This House Is A Circus
3. Teddy Picker
4. I Bet You Look Good On The Dance Floor
5. Dancing Shoes
6. From The Ritz To The Rubble
7. Fake Tales Of San Francisco
8. When The Sun Goes Down
9. Nettles
10. D Is For Dangerous
11. Leave Before The Lights Come On
12. Fluorescent Adolescent
13. Still Take You Home
14. Da Frame 2R
15. Plastic Tramp
16. 505
17. Do Me A Favour
18. A Certain Romance
19. The View From The Afternoon
20. If You Were There, Beware
21. Balaclava
22. Bad Woman
23. Audio Live In Texas 7 June 2006
Riot Van
The View From The Afternoon
Still Take You Home
You Probably Couldn’t See For The Lights But You Were Staring Straight At Me
Cigarette Smoker Fiona
Perhaps Vampires Is A Bit Strong But…
Dancing Shoes
I Bet You Look Good On The Dancefloor
When The Sun Goes Down
A Certain Romance

The Arctic Monkeys are past the point that I intend to take my appreciation of new rock acts. There’s something odd about middle aged people liking the same music as their children (and perhaps grand children).

I will concede that from tracks heard on the radio, the Monkeys are one of the better acts of the 21st century.

Buying Arctic Monkeys At The Apollo

It is or may be available in different formats from Amazon.com – Amazon.co.uk – iTunes – eBay