MTV Unplugged in New York is a recording of the Nirvana acoustic gig in recorded in November 1993 for the MTV Unplugged television series.

It was recorded less than 5 months before the suicide of Nirvana main man Kurt Cobain and released in November 1994, the first Nirvana album after his death. 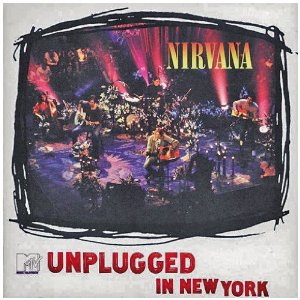 Credit must go to Nirvana for putting together an imaginative set list for this Unplugged gig when most other bands were paying their current tour acoustically.

This does however mean that this album isn’t atypical of a Nirvana gig in sound or songs.

Nirvana were one of the first bands to make me feel old. Even when Nevermind was released, I could tell that it was quality music but it didn’t belong to me but a younger generation.

This is much more accessible to me and it deserves its reputation as one of the leading live albums from the period after the 1970s heyday of live recordings.

The Man Who Sold The World

What Other People Say About Nirvana MTV Unplugged in New York

Over at Amazon, Nirvana Unplugged is adored.

What Do You Think About The Nirvana Unplugged Album?

Do you agree that this is a classic live album?

Or do you prefer your live Nirvana with electric guitars?

Because this is such a big category and there are so many very good indie and alternative rock live albums I have split the poll into two and you may find some of your favourites in the second division. Albums will be promoted when they get enough votes.