It was recorded on the tour of 1987/88 to promote the studio album, This Note’s For You.

The presence of a six man horn section means that this is not a typical Neil Young album. If that’s what you want, you’re much better off with the superb Live Rust and then, depending on your preference for acoustic, Live At Massey Hall or electric, Weld. 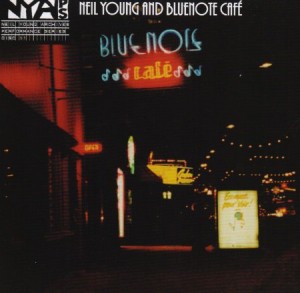 I never followed Neil Young through his studio work in the 1980s so I only know of his strange work with Geffen through its reputation. This Note’s For You was his first studio album back with Reprise and whilst he hadn’t lost his desire to experiment with new sounds, I think it’s fair to say that his return to form had started.

I have a bias towards saxophone so this album and tour have a special appeal to me. I’d have liked to hear some of his older, better known songs reworked with the horn section to create some more familiarity with the songs.

That said, this is like hearing a new studio album but recorded live in concert and it is fresh and interesting. The horns appear in sections where you’d expect to hear Young’s electric guitar blaze away but he hasn’t forgotten that many fans love to hear him solo.

It isn’t for everyone and the poll below shows that there are some highly rated live albums by Neil Young that you should hear before this one. If you’d like more variety beyond the acoustic and electric sets, I can recommend this album.

If you’re an R&B fan and you don’t like Neil Young’s normal fare but you think this may be interesting, I wouldn’t discourage you from hearing or sampling it but I’m not convinced that it moves far enough away from his normal sound towards R&B.

What Other People Think