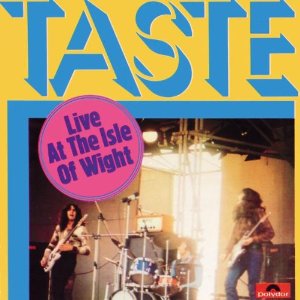 This is a 50 minute set which emphasises Gallagher’s guitar.

I’m not familiar with the Taste studio album.  I’m disappointed with the songs when I’ve just listened to them again twice in my car. Perhaps it’s the mood I’m in. Only I feel So Good got me excited.

Taste had their gear stolen and so had to play on borrowed kit so you can understand it if Taste weren’t on their A-game.

Rory Gallagher has the reputation for being one of the best blues based guitarists of the late sixties and seventies and he certainly didn’t have the success that he deserved.

Also appearing at the isle Of Wight festival was Jimi Hendrix and the legend says that Rory Gallagher blew him off the stage. Not sure about that.

He’s a fiery guitar playing which is demonstrated on here and a good singer but I think Gallagher went on to do much better performances than this.

The Isle Of Wight Festival was huge in late August 1970 with estimates of 600,000, perhaps even 700,000 people there to see Jimi Hendrix, Chicago, The Doors, The Who, Miles Davis, Joan Baez, Joni Mitchell, Jethro Tull, Sly & the Family Stone, Ten Years After, Emerson, Lake & Palmer and Free.

I’m not sure that this is the natural setting for taste or Rory Gallagher. I have the impression that he thrived on audience feedback in small, intimate gigs.

I hear very little of the crowd other than between I Feel So Good and Catfish when they need to shout for an encore.

I feel bad about rating this live album with a low score but it didn’t make much of an impression on me when I first bought it or when I listened to it again for this review.

What Others Say About Taste Live At The Isle Of Wight

It doesn’t appear in any of the best live albums lists that I’ve seen.

Reviews on Amazon.com are positive.

Buying Live At The Isle Of Wight By Taste

You can get a copy of this album from Amazon. At the moment the mp3’s are not available.

It may now be available at iTunes

If you love this album, I’d be very interested to find out what you like about it.

I’m also interested to know how you think this compares with the later Rory Gallagher live albums.

I have created a readers poll to find out the best Taste and Rory Gallagher live albums. Please vote.

I have another readers poll I think you will be interested in, to find out the best live blues rock albums.