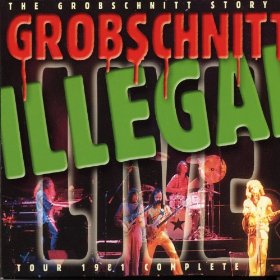 The first fourteen tracks are a support band in the style of Frank Zappa. It’s all a bit odd but it probably makes sense if you can understand German.

The proper Grobschnitt concert starts with the announcement and then the first song Razzia.

I wrote a review on Amazon but it seems to have fallen foul of the censors. Here it is:

If you like prog rock and you want to branch away from the mainstream of Pink Floyd, Yes, Genesis, ELP, King Crimson, Van Der Graaf Generator, Jethro Tull etc, then it’s well worth exploring what was happening on the European continent in the 1970s.

Italy had particularly strong prog rock bands like PFM, Banco Del Mutuo Soccorso and Le Orme while Germany gave us Eloy and Grosbschnitt. By 1981, Grobschnitt had provided us with two prog rock classics, the studio album Rockpommel’s Land and the live album Solar Music Live which is a prog/space rock guitar symphony for guitars.

This might be on its way to becoming the third album worthy of being called a classic. With just less than 4 hours of music on the album, it’s going to take a lot of getting to know really well.

This album starts with about 25 minutes of “support act” (tracks 1 to 14). I’m not really sure of what’s going on because it’s strange like Frank Zappa (which suits me fine) but it’s also in German. The band is then announced and we start to hear the proper music. Trying the mp3 samples doesn’t work in this situation because you get all the strange things going on to prejudice your opinion and you can’t judge a proper prog rock anthem from 30 seconds at the start. You can assess the sound quality and this is very good.

What I did and I recommend you do the same, is to invest in several of the longer tracks since (at the time of writing) they are all open for purchase at the 99p each. That’s not bad when you can buy a 10 to 17 minute track. This gives you a proper chance to assess their progressive capabilities and, if you like guitar based prog, I think it will suit you very nicely. There are a few longish spoken German tracks which get the crowd laughing to avoid and I’ve moved out of my full version of the album – Die Balli Show 1, Die Balli Show 2 and
Die Salzmann Show.

The band are quite eccentric and have a sense of fun. Some of the songs are in English (and sung with strong accents) but German is the dominant language. I have mixed feelings about not being able to understand because it means I don’t get irritated by inane, simplistic lyrics but also I don’t know what the songs are about either. I just let the music sweep over me.

The best live albums present a concert (or simulated live experience) in such a way as to leave you wishing you’d have been there. That’s the way I feel about this album. I might be back to add the extra star but I try to be stingy with my five star recommendations. If you like guitar based symphonic progressive rock and have an open mind about language, you must give this a try.

PS be careful with other Grobschnitt album because, in the search for success, the group moved away from their roots like Genesis did.

Is it the best live album by Grobschnitt? Which do you recommend?