USA is a live album and DVD by King Crimson.

Overdubs were made in the studio by Eddie Jobson adding violin to tracks 2 and 7 and piano to track 3.

The album was released in 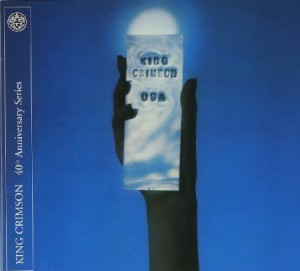 The original release of the album was:

In 2005, 21st Century Schizoid Man was moved to track 9 and replaced by the version from Asbury Park 28 June 1974. Eddie Jobson’s overdubs were also removed.

In 2013, track 6 was split into two (according to Wikipedia but not Amazon) for the 40th anniversary edition. A DVD was also added.

This version of King Crimson are very highly rated and they were involved with Larks’ Tongues in Aspic (1973), Starless and Bible Black (1974) and Red although the exact make-up of the group never seems to stay constant.

As you will see in the poll further down, it is this group that has created the most popular live albums in this golden 1973/74 period.

Is this a great live album? Is it the best live album by King Crimson?