An Evening of Yes Music Plus is a live album by Anderson Bruford Wakeman Howe.

At this stage another group with Chris Squires, Trevor Rabin, Tony Kaye and Alan White were performing under the Yes brand name.

It was recorded at the Shoreline Amphitheatre in Mountain View, California on the 9th September 1989. It was released in 1993 and re-released in 2006. 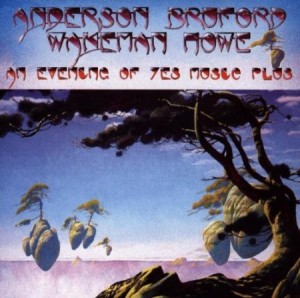 Performing on the album are:

It has quite a good reputation but for a live album of the magical prog rock created by Yes in the early 1970s, I think it’s virtually impossible to look past Yessongs.

Do you think this is this the best live album by Yes (or closely linked groups)?

It is NOT nominated in the poll to find the best live prog rock albums. Do You think it should be?