Eat A Peach is a part studio and part recorded live in concert album by the Allman Brothers Band.

A deluxe version of Eat A Peach adds the final Fillmore East show on June 27, 1971. Availability of this seems limited in the United States but it’s available as an mp3 download in the UK.

Fresh from the success of Live At Fillmore East, the Allmans decided that you can’t have too much of a good thing and especially after the tragic loss of band leader Duane Allman on October 29, 1971.

Mountain Jam, One Way Out and Trouble No More were live recordings. 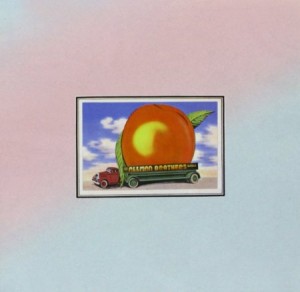 Songs On The Allman Brothers Band Eat A Peach

When the album was first released as a double vinyl album, Mountain Jam was edited down to 19:37 but the CDs have this extended to over 33 minutes.

The deluxe version with the extra songs from the Fillmore East concert:

The Allman Brothers Band At Fillmore East is widely recognised as one of the best live albums ever released but how does this compare?

Is this also a great live album? Is it even better than the first Fillmore album?