Holy Haunted House is a live album by Gov’t Mule.

It was recorded at The O’Shaughnessy Theatre in St. Paul, Minnesota on October 31, 2007.

Strangely it includes a live version of the entire Led Zeppelin album Houses of the Holy. I say strangely because this is probably Zeppelin’s best covered album on their own live albums The Song Remains The Same and How The West Was Won. It’s brave to be ready to be compared against 1972 and 1973 Led Zeppelin.

It is not that unusual for Gov’t Mule to pay tribute to a group like this, particularly at their Halloween concerts. Another live album, The Dark Side Of The Mule features plenty of Pink Floyd songs and they’ve also played sets of songs by The Rolling Stones and The Who. 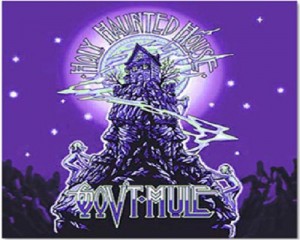 Play With Fire,
Time To Confess,
Million Miles From Yesterday,
Rocking Horse,
Birth of the Mule,
Larger Than Life,
Fallen Down,
The Other One Jam,
Blind Man in the Dark,

The Song Remains the Same,
The Rain Song,
Over the Hills & Far Away,
The Crunge,
Dancing Days,
Drums,
D’Yer Mak’er,
No Quarter,
The Ocean,
Come On Into My Kitchen,
32/20 Blues

Is this the best live album by Gov’t Mule?

Does this album deserve to be included in the poll to find the best blues rock live album?

Do you think of this as southern rock?