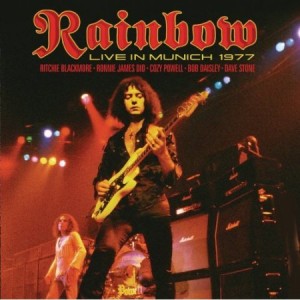 Songs On Rainbow Live In Munich 1977

We have a good collection of live recording by Rainbow from their Ronnie James Dio period in 1976 and 1977 following the Rainbow Rising studio album. It’s a shame that the set lists show little variation because tracks are repeated time after time. Deep Purple had the same problem.

For avid Ritchie Blackmore fans, there is interest in spotting the small differences in the guitar solos but for the rest of us, one of these live albums is probably enough. I also recommend the first two studio albums – Ritchie Blackmore’s Rainbow and Rainbow Rising.

This offers the interesting option of having say On Stage on CD and Munich 1977 as a DVD giving you different experiences.

Here is a summary of the reviews from Amazon.co.uk for the DVD.

Is it the best live album by Rainbow? Which do you recommend?

These albums feature in two of my group based polls – for Ronnie James Dio and former members of Deep Purple. These will over time help guide you to the best albums.

The overall poll below will help put Rainbow’s contribution to hard rock and heavy metal into context.