Live In Texas 1979 is a live album of UFO after Michael Schenker was replaced by Paul Chapman recorded on 21st March 1979.

Chapman had previously been the second guitarist in UFO in 1974 to promote the Phenomenon album. He left in early 1975 to form Lone Star (another group I liked and saw live). He filled in for Michael Schenker during an absence in 1977. 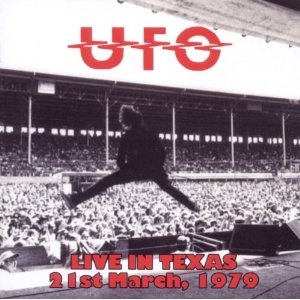 There are only two tracks – Electric Phase and Pack It Up ‘n’ Go – that are not on the widely recognised classic live album Strangers In The Night which had just been released when this concert was recorded.

Casual fans have no need for this but if you’re really interested in UFO, it does give you the chance to see how Paul Chapman compares to the great Michael Schenker.

I haven’t heard this album but I’ve read that the recording quality is OK but not pristine so if you’re happy with bootlegs, this will be OK but if you naturally prefer studio albums, again you should skip this one.

Love it or hate it? Leave a comment and tell the world why. Is it one of the best live albums by UFO?