A Fistful Of Alice is a live album by Alice Cooper recorded in June 1996 at Cabo San Lucas, Mexico. It includes guest appearances by Slash, Sammy Hagar and Rob Zombie.

This album has also been issued under the title of Alice Cooper Live at Cabo Wabo ’96.

Alice Cooper A Fistful Of Alice 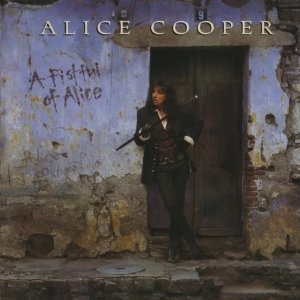 Unfortunately Alice Cooper has issued different versions of this album in the UK, USA, Australia and Japan. And perhaps other places too.

This is the set list on the album I’ve got in my collection – the UK version.

The US version loses Under My Wheels and No More Mr. Nice Guy but gains Billion Dollar Babies.

This is a good set list that mainly focuses on his early 70s glories. Unfortunately it’s only around the 60 minute mark depending on which version you can get. Since they weren’t struggling to fit within the single CD limits, this makes it strange that there are different versions around the world.

Here is what Alice Cooper looked and sounded in 1996 performing Elected from this concert.

Buying A Fistful Of Alice

Do you think this is the best Alice Cooper live album, even though it’s recorded 20 years after his prime?

Should this album be included in either (or both) of my polls to find the best classic rock live albums and the best hard rock and heavy metal live albums? I don’t think it’s good enough to get worthwhile support.

Because there are so many good live albums that deserve attention, there are second division polls for classic rock and hard rock. Albums will be promoted if they get a lot of votes.