The Alice Cooper Show is a live album by Alice Cooper recorded at the Aladdin Hotel in Las Vegas in August 1977.

This is quite late in his career for his first live album and much of his success was in the early seventies.

Alice Cooper is a showman and any live album is going to fail to capture the full experience of his live shows because the “shock-rock” visual antics were such an important part of the entertainment.

The emphasis on death and dying is not to my tastes but he does have some great tunes. 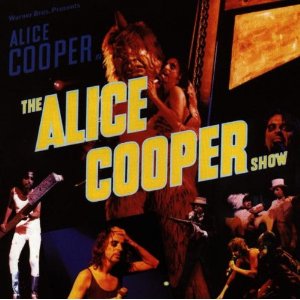 The big problem with this live album is that it is too short at 38 minutes. There are many classic Cooper songs that are missing and as soon as it gets started, it ends. It would be nice to see this album extended with the full show, in the way The Who did with Live At Leeds.

This is a softer sound than you may expect from an Alice Cooper live album with more emphasis on the piano parts. Remember this comes after he broke up his original Alice Cooper band.

Here is a video of Alice Cooper performing Schools Out live in 1977.

And a 1975 version of Only Women Bleed to show that Alice Cooper has a softer side to him.

What Do You Think About The Alice Cooper Show?

This album has a mixed reputation so what do you think? Is it the best Alice Cooper live album?

Should this album be included in either (or both) of my polls to find the best classic rock live albums and the best heavy metal live albums? I don’t think it’s good enough to get worthwhile support. Both these polls have more than 100 voters.

I also have a second division heavy metal poll where albums can be promoted.

And a second division classic rock poll as well which might have more of your favourite albums that need your support.