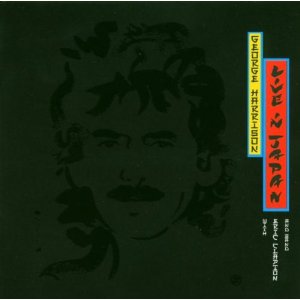 This is effectively a greatest hits/ best of recorded live for The Beatles songs written by George Harrison and the his solo songs.

As you listen, you appreciate how talented Harrison was in his own right and wish he’d been allowed more than one song per album – The White Album and Abbey Road were the exceptions).

There we have it. Eight Songs originally recorded by The Beatles that Harrison wrote. Three songs from the classic triple album All Things Must Pass and three from his revival album, Cloud Nine).

Two of these songs – Something and While My Guitar Gently Weeps – are definite selections for my ideal The Beatles Live album that I have in my head. If The Beatles had been able to reform in the early nineties and play their solo hits, I’d want My Sweet Lord and Got My Mind Set On You added as well. Believe me the competition would be extremely tough but I believe these songs stack up against any of the greatest pop and rock songs ever recorded.

These are the obvious highlights and the best known of the songs. The others range from pleasant to very good (e.g. Taxman).

I’d have liked a nod to The Traveling Wilburys first album. The song publishing indicates that Harrison was a major force in four of the songs.

George Harrison is in fine voice throughout and the band is tight. It’s a great shame that he didn’t bring the tour to the UK or America.

I haven’t listened to the album through headphones yet so I’m not clear which guitar leads are played by Harrison or Clapton. For those who appreciate the subtle, flowing short solos that Harrison contributed to The Beatles songs, you don’t need to worry that Clapton is going to turn this into a vulgar guitar fest. Eric doesn’t destroy the beauty of these gentle songs.

My only reservation is that I never feel that Harrison, Clapton and the band cut loose and create the special fire that sometimes happens in live albums. Perhaps Harrison was just too gentle and nice.

Here are George Harrison and Eric Clapton performing While My Guitar Gently Weeps in 1987.

When I first saw Paul McCartney live, I sat there continually thinking “Paul is fab. He is a former Beatle.”

I’m sure those lucky people he caught these gigs were thinking “George is fab. He is a former Beatle.”

You can go and see tribute acts like The Bootleg Beatles and they put on a good show but there is no substitute for seeing the real thing.

It gives you a special tingle.

The crowd is fairly subdued and there’s no banter. I’m sure many will appreciate that although I miss it.

This is a very good live album by George Harrison with a few must-have songs for any fan of The Beatles who long for a live experience.

I’m sure avid George Harrison fans will accuse me of under marking it and perhaps in the years to come, I will agree. My problem is that, with the exception of a couple of singles, Harrison as a solo artist has never lived up to the potential suggested by the late Beatles songs.

What Do Others Say About George Harrison Live In Japan?

The reviewers at Amazon.com enjoy it very much – of the total of 45 reviews, 30 of them are five stars and 9 are four stars.

You can get your copy of this album from Amazon.com – Amazon.co.uk – iTunes – eBay

What Do You Think About Live In Japan?

If you’ve heard this live album by George Harrison, I’d be interested to know if you agree with my rating. Let me know by leaving a comment below.