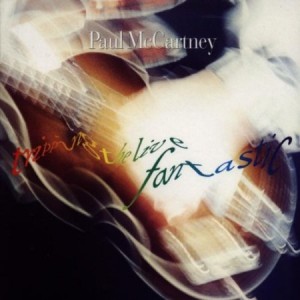 This collects the best tracks from a wide variety of different concerts during the 1989/90 world tour. As such, this is very much a best of the best. Details of the recording venues are available at discogs.com. Inner City Madness  was recorded at the Birmingham concert on February 1, 1990 and I might have been there. I saw McCartney at the NEC on this tour but I can’t remember which night I went.

The final song, Don’t Let The Sun Catch You Crying, a cover of a Gerry & The Pacemakers hit from 1964 is done well but it doesn’t belong after the climax of The End.

This has some of the best pop/music ever written and recorded but such heights only serve to heighten the difference in quality between his 1960s and early 1970s songs and those later in his career. The best songs are definitely worthy of the full 10 out of 10 allowed in my rating but some of the others are in the 5 to 7 range. This gives me a problem in terms of how much the best of the best outweigh the ordinary. I’m giving it 8/10 for the set list. Paul McCartney could have done much better.

The band is excellent (from Wikipedia):

I prefer the two versions of Tripping The Light Fantastic to the other McCartney live albums although I’m not sure how much of that is the emotional link of hearing him sing Golden Slumbers/Carry That Weight/The End for the first time and being overwhelmed by it.

The guitar is higher in the mix on the rockier songs and solos which give the songs more impact. I know it’s not The Beatles performing but it’s the closest we can get after the deaths of John Lennon and George Harrison. I’m giving the performance a full 10 out of 10 rating.

It feels very live and the crowd are enthusiastic and thankfully, the baby-boomers have outgrown the constant wailing that spoils Live At The Hollywood Bowl. McCartney sounds excited to be back in front of a live audience and jokes with the crowd. I’m giving atmosphere and authenticity a rating of 9 out of 10.

Listening to this, there’s  a sadness that we will never have a live album from the late period of The Beatles. Even so, I’m giving this a rating of 27 out of 30 and a well selected highlights album would get 29 out of 30.

This album has too many later McCartney tracks that are OK or pleasant but don’t bear comparison to his earlier material. With the popularity of digital mp3 players I think it makes sense buying this album rather than the pre-selected highlights and cut out the ordinary tracks. If you play CDs, then the Highlights album is probably better suited.

Is it the best live album by Paul McCartney? Which do you recommend?