Animal Serenade is a live album by Louis Reed.

It was  recorded in Los Angeles at the Wiltern Theatre on June 24, 2003 while Reed was touring to promote The Raven studio album. 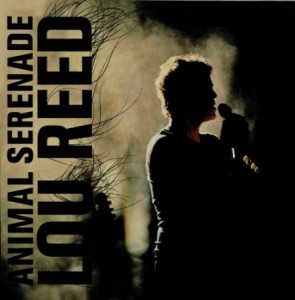 The legend has it that Lou Reed was at his best in the late 1960s and the 1970s but this album challenges that view. It is also blessed with a really interesting set list with anything from Transformer or The Velvet Underground staples like Sweet Jane, Rock & Roll, I’m Waiting For The Man and White Light White Heat. He doesn;t ignore the Velvets but dusts down several of the other well known songs.

The cello played by Jane Scarpantoni gives the album a unique atmosphere. This time the band is trying to be as noisy as possible but instead, the sound has a sparseness that creates an intriguing tension. A burst of guitar solo is even more dramatic when it happens. This demonstrates the way that Reed is such an intriguing live artists and why his live albums can be essential.